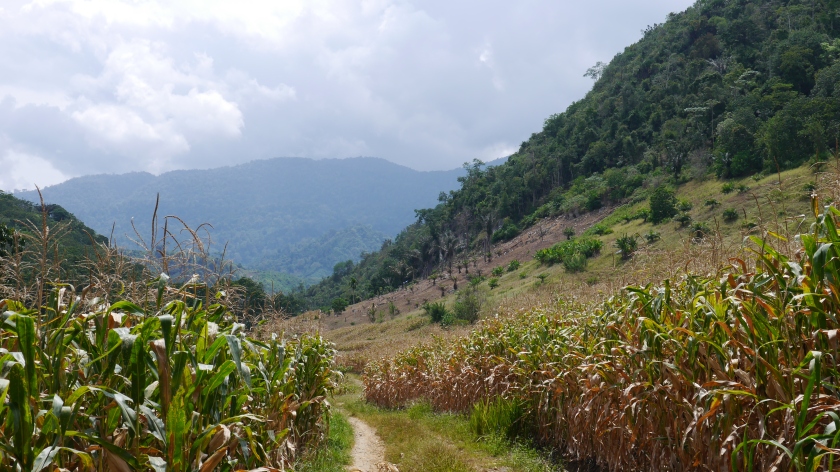 An elderly woman was screaming on the street. She ran, stopped, and screamed again. She preached in local language that I didn’t comprehend. “She’s drunk,” said my ‘brother’, “watch it while it last.”

I didn’t quite understand the expression on his face. He was having a slight smile. As if it was completely normal at any given day to watch an elderly woman got drunk on the street. I was reluctant and feeling very uncomfortable to treat her as a spectacle. But everybody else seemed to just let her be.

“Where does she live?” I asked my ‘sister’ (my ‘brother’s’ wife) at the veranda.

“How may I explain? She sold her house and land in this village to buy a land in another province. You know, the land in that province is unclear (ngga jelas). So she returned here and live in a hut in the forest to open a corn field.”

Will I be able to go through what that elderly woman had gone through and not losing my mind? I don’t think so. Will I also be drinking and screaming and preaching?

Some young men were trying to catch her but she kicked them and fight. “Even her husband didn’t get drunk. He’s busy working in the field. If I were her husband I would divorce her,” said my ‘brother’. I didn’t say anything. I knew nothing about her. The woman was still drunk until dawn. Strong tuak (fermented palm wine), indeed.

I came back inside and did the dishes at the backyard. A quick meditative escape to ease my troubled mind. I was washing dishes next to a huge grave tomb with a huge cross sign on top of it. A middle-sized pig was roaming, followed by nine of her piglets. The dark cloud was followed with ashes falling from the sky. Mount Sinabung in North Sumatra had started to erupt again, after several eruption in 2010, 2013, and 2016. The wind had brought volcanic ashes up to this village in Southeast Aceh.

“Are you okay? The inhabitant of that grave doesn’t disturb human, don’t worry,” said my ‘brother’. It was my first day at the village and I had told him earlier that I might need more help because I foresaw this village to be the most challenging out of the four villages that I’m studying. And unfortunately I had to leave this last village the second day I was there because of the Sinabung eruption. But I’m looking forward to come back after another weeks of fieldwork in the other three villages.

I foresaw challenges in this village because it’s the most unfamiliar. It was as if I was in Aceh that’s unlike the “conventional” Aceh. The villagers are almost 100% Christian and from an ethnic group of North Sumatra (Batak Toba). Tuak culture, pig rearing, Mount Sinabung, were not the things that would occur in an outsiders mind when they hear the word “Aceh” – a province known for its strict implementation of Islamic Syariah Law. But, as I have been experiencing, Southeast Aceh is a “different kind” of Aceh. It might also be seen as a “marginal” or “marginalized” district from the Aceh “center”, but I am not sure, I mean, can we say it’s marginal but the local elites/local government people here are very well-connected/well-established/having a good foot with/in Banda Aceh (the central/capital of the province). And the thought of a marginal village within a marginal district, the marginal of the marginal … I don’t know – my assumption is very premature.

Initially, this village was not at all in my list of possible case study. But the National Park had chosen this area as their “Role Model” in their current conservation project. I wonder whether the “difference” and “position” of this village and its inhabitants could have played a role in the reason why the National Park chose it as a Role Model, such as, perhaps the people are more submissive and least likely to fight back considering their already marginal position. But it’s important to note that a lot of the land owner here are somewhat “absentee” and live in the city or other villages. There’s another evidence showing that many villagers here are only hired by big capital/elite who actually “owned” the land. The elderly drunk women seems to be an epitome of the layers and layers of marginalization happening to the villagers here.

On the other hand, it was also very important and interesting to revise the judgement of marginality and open my mind to other explanation, in which this village was chosen because it is part of a National Park’s officer’s “Proyek Perubahan” (a personal project assigned to national park officers during short-training, in order for them to get promoted). It happens to be that the officer who propose this village as his “Proyek Perubahan” assignment is from the same ethnic group with the villagers (Batak Toba). I am curious to tease out the rationale of the national park and its NGO supporter to choose this village as their “Role Model”.

People in this “Role Model” village told me about their sense of being marginalized. From my research so far, the repressive tree-raiding act of the previous National Park regime affected all the four villages that I studied. But in the other three villages, the National Park’s officers’ act was quite measured and they’re after specific targets. In this village the officers were most ruthless with the highest number of people being affected. In my ‘brother’s’ field hut, people were telling me that they are being “killed slowly”. One of them asked why were they here but being expelled (diusir-usir)? Why didn’t the government move them to Papua? My ‘brother’ said the (previous) national park officers had more “balls” to treat them that way (repressive) perhaps because they are Christian. I still need to dig deeper – it probably hurts for the project officers to acknowledge the villagers’ voice but would it be better if I concealed their “cry” to keep it unheard?

PS: I should have provide you the brief general introduction of the area and the “Role Model” project etc., – I was hesitant because of my intention to keep everything anonymous, but I will try to do a proper intro in next posts.

Postcards from my fieldwork